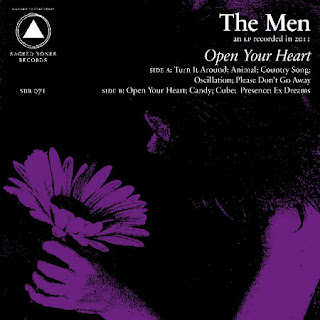 The Men show a less abrasive but just as thrillingly diverse side on album No.3

It's a shame The Men didn't release their second album "Leave Home" earlier than November last year. If they had done, its brilliantly abrasive mash of punk, noise- rock, indie and shoegaze could have set a noisy precedent for guitar music in 2011. Don't fret though, because "Open Your Heart", the band's third LP, should set a precedent for guitar music in 2012, and a mighty fine one at that.

The intensity and volume is somewhat turned down here, but that only adds to the more controlled aspect of "Open Your Heart". Like "Leave Home" it jumps all over the place stylistically, but also like "Leave Home" that's what makes it such a thrill. Opener "Turn It Around" is a raucous, blues- inflected punk rattle that's simple but hard- hitting. "Country Folk" sees intertwined guitars drenched in reverb and twang in a Southern- fried 5- minute instrumental. Best of all though is penultimate track "Presence", a brooding, droney and fuzzy 7- minute noise- rock epic with eerily monotonous vocals and layers of distortion a la Liars. They've saved one of the best hooks on the album 'til last too on closer "Ex- Dreams", a relentless but controlled punk blast.


"Open Your Heart" is an energetic slab of rock brilliance which ventures into many sonic pastures. Although most of the ideas here have been tried and tried again by others, the fact that The Men manage to put a consistently refreshing spin on them is testament to the band's talent. Almost instinctively "Open Your Heart" should be added to the list of great guitar music thus far in 2012.