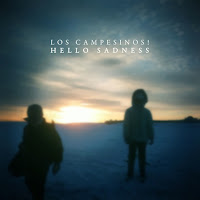 Throughout their back catalogue, Cardiff indie- pop seven piece Los Campesinos! have always seemed like the perfect band to soundtrack teenage, remotely harowing but funny coming- of- age stories, akin to Richard Ayeode's recent adaptation of "Submarine". Along with their endearingly sad tales of love, loss and desperation there has always been a hint at that childlike naivety; the sense of stepping out into the wide world, facing the challenges it throws at you and entirely not knowing how to deal with them. Gareth & co.'s output has always been one suited to chime with the wilderness of a teenager's formative years.

Their fourth album "Hello Sadness" sees a sense of change in the emotions though. Whereas before Gareth's lyrics of heartbreak and depression seemed inexperienced, on "Hello Sadness" the emotion grips you by the throat and almost forces you to believe that it is the real thing. This is REAL sadness. The more mature, world- weary outlook on life adopted by the band here is backed up by what is wholeheartedly a more mature sound.


Opener "By Your hand" is the closest the band get to the pop record that they had initially intended to make. The keyboard launches an infectious melody before the pounding drums and handclaps complete the circle of one of the catchiest songs you'll hear all year. More to the point of "Hello sadness" though however, it leaves Gareth pondering his position as he sings "I'm not sure if it's love anymore."


The title track is the pinnacle of the band's new loss of naivety and finding of the ability to form a song remarkably well. It possesses an Arcade Fire- esque giddy, as pensive keyboards start off before the song explodes into a flurry violins and anthemic stateliness, all of which slots together pleasingly well.

Things are only to get darker from here on in however. "Life is a Long Time" sees Gareth reach super- depressive mode and despair at the human condition to a backdrop of Smiths- esque picking as he sings "You know it starts pretty rough/ and ends up even worse." "Every Defeat a Divorce (Three Lions)" makes a clear reference to the frontman's love of football, although you sense that it may be metaphorical for darker emotions present by the desperation in Gareth's voice as he sings "If he hasn't blown the whistle then it's not quite over yet." "Baby I've got the Death Rattle" starts off as a relatively twangy funereal march, before coming to life for the final two minutes, a lively precursor for the ghostly and mournful closer "Light leaves, Dark Sees Pt.II".


Los Campesinos!'s accolade of achieveing a more mature sound comes at no heavy price. They may still not have a cure for life's darkest internal problems, but they now sound like a band who would provide a soothing accomplice for people older than 17. Josh T. Pearson may still be the man to go to when you want to drown your sorrows with a bottle of whisky, but Los Campesinos! make a rather convincing argument for the band you should go to if you want some friendly, modern rhetoric to get you through your hardest times.

Download: 1) "Every Defeat a Divorce (Three Lions)", 2) "Hello Sadness", 3) "Baby I've got the Death Rattle"
For fans of: The National, Arcade Fire

You can't really blame Fixers for feeling the pressure. After announcing their arrival with two impeccable songs and hopes of "living the psycadelic dream", the quintet were facing people expecting the same kind of enormity. They won't get it with "Here comes 2001..." though. Opener "Another Lost Apache" starts off with Fleet Foxes- esque harmonies before descending into one of the most annoying pop melodies you're likely to hear all year. The shimmering "Crystals" and summery chill- pop of "Uriel" both carry a certain amount of elegant charm about them but are devoid of any wow factor, and for all it's brain frazzling psycadelics, by the time closer "Passages/ Love In Action" comes to a halt, you'll probably find yourself pretty glad that it's over.

A modern and icily beautiful introduction to the NYC duo

Acting against the norm for boyfriend and girlfriend duos who settle for being mediocre pop throwbacks (Cults, Summer Camp), NYC husband and wife duo Exitmusic's "From Silence" is an exercise in glacial modernity, but one that is quite brilliant at that. Opener "The Sea" is fulll cavernous and dense Esben & the Witch- esque vibes, whilst "The Modern Age" sounds like Beach House meeting Zola Jesus on the moon. It's on the closer though "The Silence", a haunting and spectral beauty that sounds like Portishead at their most expansive and sparse that the band really nail their sound.

Go Tell Fire To The Mountain

After keeping their identity behind closed doors for so log, Wu Lyf unveil themselves as one of Britains most genius new wonders

When Wu Lyf first emerged in a flurry of strange imagery, stretched out, echoing and cacophonous pieces of self- dubbed "heavy pop" and refusals to talk to the press, nobody was quite sure what to make of them. All we had to go on was a set of demos showcasing huge potential and a band with a ferocious live reputation who had previously gone under the dumb- but- slightly- funny monicker of Vagina Wolf.

Come their debut album "Go Tell Fire To The Mountain", and Wu Lyf pull out all the pretensions and reveal that actually, they're four young men from Manchester who abide closely by their own codes and boundaries, and have a set a 10 tracks that are almost all near- masterpieces. Opener "LYF" builds up slowly from pensive and shimmering organ keys into a stratospheric sky- kissing piece of orchestral pop that trundles along with an afro- pop- esque beat.

"Such a Sad Puppy Dog" announces its arrival in an expanse of cold and bear emotion lead by frontman Ellery Roberts and his fixating howl, before it explodes into a heavily atmospheric, reverberating and astounding slow- burner. "We bros", the centre- point of the album, is more jaunty, and is sure to spark some no less than raucous singalongs when played live.

As closer "Heavy Pop" crashes to an end, it marks the end of the arrival of a band who fit comfortably into their own ideology, and can work their own rules into masterpieces; more than that though, there is proof that in Wu Lyf, we have one of Britain's most unique, imaginative and wonderful bands that you're likely to hear for quite some time.