Remembrance Day: Have We Forgotten? 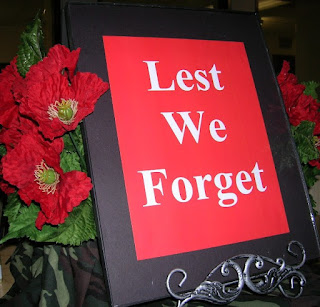 Just this morning, Luke Turner, co-founder and editor of cutting edge music and culture online publication The Quietus, published an article on his own site about the over-politicisation, corporatism and "jingoism" that has somewhat hijacked the poppy wearing culture and Remembrance Day, in Britain at least. It's a great read, and he makes plenty of valid and fair points. However, it provokes a pertinent question; how did we get to the point that the discussion about Remembrance centres more around political posturing/ unscrupulous media tactics and not to mention the focal point of Turner's article, the commercialisation and governmental gain of war from a financial point of view, and less about the lives lost?

Social and cultural history dictates that everything has a consequence or inference, and of course it's necessary to address these implications in all examples of War (more on that later). But that the dedication of one day a year to the memory of the hundreds of thousands who have lost their lives in these circumstances has been commandeered by smear tactics and the remorseless embodiment of war at a corporate level (for example Lockheed Martin UK's sponsorship of The Poppy Rocks Ball) is at best ironic, at worst contemptuous.

It's disdainful that more coverage was given to the fact that the Conservative party photo-shopped a poppy on to a Facebook picture of David Cameron  in the lead up to the ceremony than the actual proceedings. That the poppy-wearing culture has become just another hand with which the crack the political point-scoring whip defies and ignores the idea of Remembrance at the most fundamental level. Unlike Mr. Turner, I did buy and wear a poppy this year despite all of this. Pretty much any happening has its pros and cons, but I bought and wore a poppy in the name of honouring what the occasion actually marked rather than thinking about what colour Jeremy Corbyn's poppy is going to be.

The aforementioned sense of historical context is exactly why I have rather bittersweet feelings about Rupert Brooke's poem 'The Soldier'. An incredibly moving, heartfelt paean to friends he lost during the First World War, the piece switches between a sense of patriotism and fluid, gorgeous imagery and prose, creating huge amounts of space for memories/ remembrance and vivid imaginings of the horrors of the occasion as well as holding it's head high. Following the war, this sense of pride should not necessarily be discarded for those involved at the ground level, but in 2015 it's a slightly dangerous realisation. Detractors would point towards the fact that, were this poem written this year, it would be called nationalistic. There may be the case for a discussion to be had there, but in an age where the Far Right reverse the slightest elements thrown their way it's important to keep a tab on the way in which language is used. In this way it's impossible to escape the literary analysis of the wider insinuation attached to Remembrance Day, but the change in social climate is always at the heart of what drives a collective occurrence.

From 'The Soldier' by Rubert Brooke:


"And think, this heart, all evil shed away,
A pulse in the eternal mind, no less
Gives somewhere back the thoughts by England given;"

I've never quite gotten round to reading Sebastian Faulks' book Birdsong but became very attached to Phillip Martin's two-part adaptation for the BBC in 2012.  In the final moments of the second part, Eddie Redmayne's character emerges from the depths of a tunnel on to a stricken, barren battlefield. He's greeted by two German soldiers, who tell him that the war is over, and he embraces one of them. Not only is this resonant of much of the history behind the Great War (and several wars afterwards), but it's a deep sigh of both relief and sorrow. It's the realisation of the terror he has just experienced, and an allusion to the following years of potential ill- mental health that stalks the souls of the men who gave their lives so *ahem* memorably.

Without dwelling too much on the subject of ethnicity, which ideally wouldn't be a paramount part of the discussion at all, it must be stressed just how important the actions of the Ahmadiyya Muslim Youth Association have been and what a positive they are in light of everything else discussed in this piece. There's still a more widespread issue with regards the memory/representation of soldiers from foreign communities who fought and died in these circumstances. On the 2nd November this year freelance journalist, news presenter, editor and author Keiran Yates tweeted that she would "Happily wear a poppy once mainstream media make an effort to properly recognise India's contributions to BOTH world wars". Fair enough, but considering that four years ago members of the country's more ignorant sectors whipped up a reaction to the Poppy burnings then the sense of community is, at least in some parts of the country, more recognisable.

Ultimately it seems as though the reasons these men and later women died have been completely forgotten, as though they were never as important as the freedoms we now enjoy. It's easy to sit in a medieval-styled office building, point fingers and use important cultural and historical dates for the sake of gain; maybe it's TOO easy and that's why it happens so much. All casualties of war should be remembered and either commemorated or learnt from, or both. While it looks like there are lessons that some people might never learn anyway, if the situation is consistently marred by mud slinging then it might not be long before the lessons aren't taught anymore.