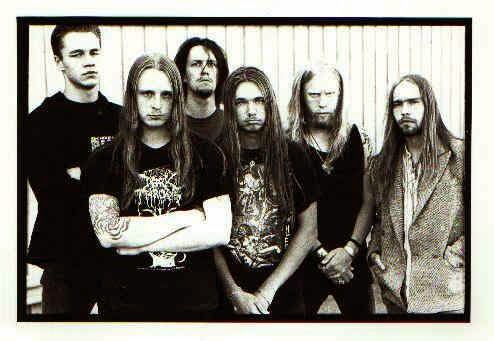 Gothenburg Melo-death pioneers At The Gates' first album since their seminal 1995 album "Slaughter of the Soul" (deemed by many to be the pinnacle of the Melodic Death Metal Genre), "At War With Reality" was always destined to suffer the wrath of keyboard warriors and the "Carcass 'Surgical Steel' syndrome" upon its arrival. Almost as soon as the record starts however it'll take the most stone-hearted of Metal fans not to pump their fists in relief. The eerie, Spanish spoken word intro leads destructively into "Death and the Labyrinth", a steam-rolling fusion of righteous tremolo picking and massive, rollicking grooves. Immaculately produced, both searing melody and crushing heaviness are served up plentifully here; "The Circular Ruins" is a definitive marriage of both those aspects, whilst "The Conspiracy of the Blind" is classic At The Gates in the truest sense. That song, along with the more mid-paced "Order From Chaos" are nowt short of beautiful in their melody. A return that had many trembling with nervousness should see the same people trembling with happiness.

Experimental Hip-Hop, Electronic, Neo-Soul and Nu-Jazz producer Flying Lotus' fifth opus, "You're Dead!" has a rather self-explanatory fascination with the macabre subject of the end, and all its finality. Consistently diverse, captivating and colourful atmospheres and soundscapes are conjured, all inexplicably reflecting the album's morbid spacial comfort zone, all confirmed by its title and track titles like that of the 40 second stop-start haze of "Fkn Dead". Some of the finest moments here come from some of the features; Snoop Dogg makes an excellent appearance on the Nintendo-synth happy crawl of "Dead Man's Tetris", and upon closer inspection past the clash of compositional personalities Kendrick Lamar brings some absolute fire to "Never Catch Me". "Ready Err Not" is an eerie, bleepy transmission from a subterranean dimension, and "Descent Into Madness", featuring vocals from occasional collaborator Thundercat, is the album's darkest, most paranoid and genuinely spine-chilling moment. Here's the frustration with Leonard Cohen's 13th studio album "Popular Problems"; it may be slightly unfair, but it's hard to not want him to release something genuinely classic again. There are times on this record where he writes some of his most prolific observations for years; "Almost Like The Blues" combines some horrific imagery with with trademark razor-sharp wit (sample lyric: "There's torture, and there's killing, and there's all my bad reviews"). "A Street" too is a crawling, smooth reversal of morality. But for every one of those moments (see also "Nevermind"), there's the relatively lazy jaunt of "Did I Ever Love You?" runs far too close to daytime radio American Country music for comfort. "Born In Chains" is standard Cohen miserabilia, and "You Got Me Singing", despite some self-referential poetic observations, is just an irritant. Cohen's been in the game for 45 years, and at 80 years old, one suspects he's running out of things to write about. Let's just hope he doesn't exhaust the practice before it's too late. The second returning legendary Metal act to feature in this piece (this time stalwarts of the Florida Death metal scene), Obituary's 9th full-length and their first in 5 years "Inked In Blood" sees them attempt and largely succeed in re-capturing the vicious, feral and groovy-as-fuck swagger that made them such a force to be reckoned with in the early '90s. "Violent By Nature" is a track that screams "this is how Obituary should sound", all chug & riff heavy gnarly-ness and some melodic chord progressions thrown in for good measure. "Visions In My Head" revolves around a deliriously rollicking stop-start groove. Occasionally the hefty, pummeling mid-paced DM is interrupted by Hardcore-indebted Thrash ragers, like the opener "Centuries of Lies" and the mid-point banger "Violence". "Within A Dying Breed" flits seamlessly between a sequence of some of the album's stinkiest, most pulverising riffs. It's not all as engaging as its finest moments, but it's a straight-up, no Bullshit Obituary album, and as such it's hard to complain a great deal.

Epic Glasgow Shoegaze/ Indie band The Twilight Sad's 2007 debut "Fourteen Autumns & Fifteen Winters" is deemed by some in the indie community to be one of the finest albums of its ilk this millenium. After their excursion into whispy synth-lead wonderland on 2011's "No One Can Ever Know", on "Nobody Wants To Be Here..." the guitars are back, as are the wholesome soundscapes, heartfelt stories and the bleak fog of winter that gave their early work such character. Straight from the off the album proves itself a listening experience for dark winter nights alone in front of the fire with "There's A Girl in the Corner", which drips with remorse from the melancholy reverb on the guitar to the assertion that "she's not coming back from this". The euphoric finale of "Last January" is one of the album's most life-affirming moments. James Graham's direct lyricism gives the impression of a coherent narrative more than any of their other releases, especially on tracks like the oddly titled but positive "Drown So I Can Watch" halfway through. Heartbreaking closer "Sometimes I Wished I Could Fall Asleep" will leave a lump in your throat, probably due to both its own sadness and the beauty of the piece as a whole.

Next Time: Taylor Swift, Melvins, We Were Promised Jetpacks and more...