The Bulls & The Bees 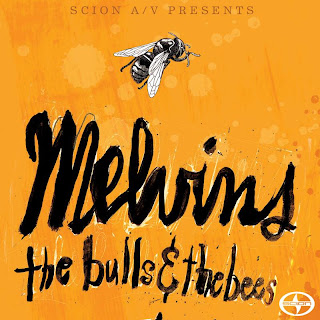 As of next year, Melvins will officially be 30 years old as a band. Whether you've acknowledged their existence or not over the years, they've always been such a constant that the initial reaction that greeted the news that they would be releasing a free EP, "The Bulls & The Bees" via the metal sect of online magazine Scion A/V was relief more than anything else. They seem like an endless entity, and bless our souls, releases such as "The Bulls & The Bees" prove they don't plan on going anywhere any time soon.

Call them formulaic if you like... The production here is probably the most refined the band have ever endorsed in. The intensity of Melvins' weird factor has also been toned down a few notches, meaning it's the most "experimental" moments here that hit home least hard of all. But let's not forget Melvins' most pulverising trait, which has undeniably been pushed to the forefront here... THE FUCKING RIFFS MAN!

"The War On Wisdom" starts off with pounding, tribal and ends on the rapturously thunderous climax of the monstrous riffcarried throughout. "We Are Doomed" begins with the signature sinister doomy- ness, before taking a surprisingky optmistic turn with some Beach Bys- esque vocal harmonies and a thrilling 7 minute rock wonder.


It's no masterpiece, but as soon as you saw the words "free EP" I'm sure you weren't expecting the new "Houdini". But "The Bulls & The Bees" is still thrilling and gargantuan when it wants to be. At least they're still here and have given us a surefire sign of at least good things to come.

Download: 1) We Are Doomed, 2) The War On Wisdom, 3) National Hamster
For Fans Of: Mastodon, The Jesus Lizard