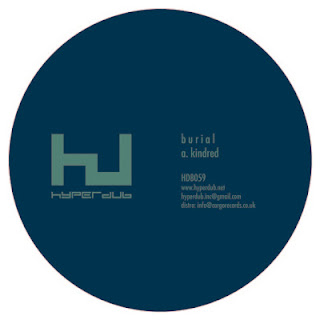 Very few have ever been as good at transfering the coldness, darkness and miasma of underworld London to sound as Burial. His brilliant song- craftsmanship and undeniably sensitive, first- hand reaction to the environment around him have given him the materials needed to wield some of the most endearingly dark and paranoid but elegant pieces ever to grace a dance floor.

On his latest release, the three track EP "Kindred", none of that is in jeopardy. Most noticeable here though is that, although Burial has always had a twisted eye for beauty in darkness, it's much more grandiose. There's still the grime, the sweat, the frightening paranoia, but evolving around it is the beautiful sonic elegance Burial has previously hinted at but never unveiled on such a grand scale. "Loner" is perhaps the least minimal thing he's ever released. It marries a dark but infectious undertow with gorgeous stabs of reverberating, euphoria- endorsing synths. The vocal sample and production in general is echoing and cavernous, giving the track an unmeasured sense of distance and depth.

"Ashtray Wasp" evolves three times, from soulful slow- jam garage to chilling, dark minimalism before ending on a warm piano melody, all the while carried throughout by a persistantly organic feel.


The fact that every track here breaches the 7 minute mark is a fundamental godsend to the success of "Kindred". The songs now have more space to manouver, evolve and shift, as well as keeping in tow that sense of elequence and fluidity. In essence then, it's your typical Burial release; Atmospheric, confounding, and truly masterful.

Dowload: All of it
For Fans Of: Floating Points, Four Tet