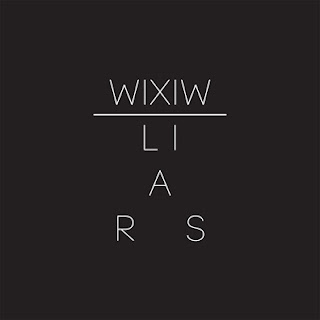 More electronic and more measured but just as skeptical, Liars' 6th album is their most human yet

It seems both a disturbing and bizarre prospect that in a few years time computers could be directly shaping and controlling human emotions, and to some extent that notion already has weight. The ever growing demand for computers and such technological advancements plus consumerism suggests that technology governs life almost
overbearingly in a lot of households already, a fact which isn't that easy to deny. We live in and are becoming more of an electronic world.

Visionary LA noise- punks Liars seem to have jumped on the "screen and button" mad bandwagon on their sixth full length "WIXIW" ( pronounced "Wish You"), and it's an interesting contradiction. Before, Liars' bleak and outlandish vocal tales of post- apocalyptic Earth and murderous scarecrows was accompanied startlingly fittingly by their appetite for sheer noise terror. On "WIXIW" it seems strange that the band's most emotionally direct (when considering the human condition) should garner a backing track that is the band's most electronic effort yet.

The trio have almost entirely dropped the guitars here in favour of gorgeous, textured layers of synth ("No.1 Against the Rush"), lurching, paranoid dance- hall ("A Ring on Every Finger") and ugly dungeon- suited dance- punk ("Brats"). "Octagon" is characterized by Burial- esque squelches that sound like they're coming from 5 miles below the ocean surface whilst Middle Eastern influenced synths swoon in and out. Album highlight "Who Is The Hunter?" begins life as a lone reverberating bass line and and Angus Andrews' high- pitched ruminations sounding desperately lonely, before the song evolves into and understated fusion of electronic tropics.


The most interesting thing about "WIXIW" however is that it's the first time in ages that we've heard Liars address relevant human emotions. On lead- off single "No.1 Against The Rush" Andrews intones eerily "I want you/ I want you out" when reflecting on a broken down relationship whilst beautiful layers of synth prettiness glow and flutter in the background. On the title track Andrews makes the somewhat upsetting acknowledgement that "Now I know it's not enough/ I wish you were here with me." Only really the furious "Brats" with its mechanical, pulverizing synth grind and thunderous beat reverts back back to the Liars of old.


Liars are one of the few bands who certainly haven't exhausted the notion of a concept album, but they're also one of the few bands who realize that it's a dangerous cornerstone to dwell on. What's most brilliant about "WIXIW" is that Liars have found a lot of new ground whilst encompassing the creepiness that characterised them as such an essential, innovative part of the LA scene, and the indie scene in general. They're just one of those bands who will probably always find ways to do something different and interesting, and "WIXIW" certainly shouldn't leave anyone in much doubt of that.

Download: "Who Is The Hunter?" "No.1 Against The Rush" "Flood To Flood" 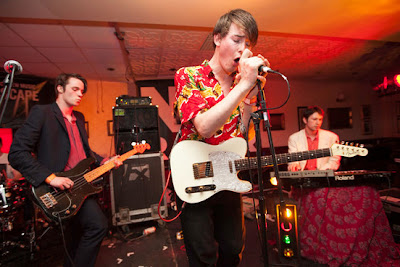 It seems that every year there is one band lauded as "the band to save British guitar music," as if said scene is in steep decline and completely neglecting bands like I Like Trains, British Sea Power and Wild Beasts, who still, despite their idiosyncracies and maybe slight musical hiccups are going strong and are essentially guitar bands. There is a case for the argument that there's no one who can really inject guitar music back into the mainstream, but is that due to a lack of support, or do we really need another Bloc Party?

Either way, here are Palma Violets with their new track "Last of the Summer Wine," which is on their "Best of Friends" EP released earlier this year. They were recently featured on the front of NME magazine, who are certianly hyping them up as Britain's next guitar hope. Indeed, "Last of the Summer Wine" is a rather lovely tune. A resolutely pretty guitar melody is backed up by a shimmering old- school keyboard melody, bringing to mind the likes of Edwyn Collins and even hints of The Clash, as well as more contemporary fellows like The Vaccines and Spector. It wasn't as urgent or as unpredictable as would have been nice, but then it's probably not supposed to be. It's certainly not re- vitalizing anything, but it sounds fresh and youthful. It'll be interesting to see where they take their sound on their debut when it comes out. 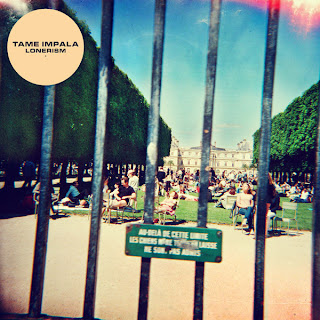 There are those who frown upon tunefulness in Psychedelia. There are those who, despite the ever present glorious shadow of "Revolver" or "Pet Sounds" believe that Psychedelia is best enjoyed when sat alone with a bottle of pills, a glass of whisky with which to wash it down and a vinyl compilation of the most head- screwing clunks and swirls from the late '60s. To be fair, they're not exactly wrong, because that's precisely the environment Psychedelia wanted to create for itself in the beginning. If you are still of such a mind- mashed persuasion when approaching Tame Impala's second full- length "Lonerism," then you should probably grab your Black Dice 12"s and head for a pink cave in Jordan, because this is perhaps the most tuneful dose of Psychedelia since Animal Collective's "Merriweather Post Pavilion."

Written and recorded almost exclusively by front man Kevin Parker, "Lonerism" is an album that very much believes in injecting, you know, REAL feelings into psychedelia than lyrics about hallucinations in which Panthers hunt Mammoths with sling shots (not that there's anything wrong with that either...). It's Parker's self- loathing and supposed social inadequacy that comes to the fore lyrically here, and thus it's the kind of album that if it didn't have glorious choruses and huge, head- spinning synthscapes to back it up then Parker could be heralded as the new Tom Waits. Thankfully though, it very much does.

The opener "Be Above It" is surprisingly sparse with its motorik shuffling beat woozy synth squelches, with Parker making the most of the rhythmic silent spaces in between. Already it's a more distinct record than 2010's "Innerspeaker," an album too concerned with guitar fuzz to get lodged in your brain. You could be forgiven for suspecting "Lonerism" of having the same problem due to the ridiculous amounts going on in some of these songs. Never does such a problem occur however.

"Apocalypse Dreams" starts off as a soulful ELO- esque '70s stomp before everything grows, twists and envelopes every aspect of the song and a gloriously layered synth wall reigns mightily halfway through. "Music To Walk Home By" is a sky- kissing mesh of bubbling electronics, a driving bass line and understated but reverb drenched guitar chords. Bearing all this in mind, it feels strange that the album's highlight, the astoundingly beautiful "Feels Like We're Only Going Backwards," propelled by a subtly funky bass rhythm and an almost moving chill- wavey keyboard melody is probably the most simplistic moment here.


The Beatles and The Beach Boys proved upon countless occasions that pop in Psychedelia, when done correctly, is an absolute masterstroke. That's not at all to say that "Lonerism" is up there with those paragons;  there are moments, like the clunky, almost industrial "Elephant" or ineffective "Nothing That Has Happened So far In My Life We Could Control," that you may very well want to skip. But at it's absolute best "Lonerism" is catchy, epic and moving, and thus much more fulfilling than much of the head- clanging Psych we've heard so far this year.

I would like to offer my most sincere apologies to anyone who is still interested in this site, or cares even a minuscule amount about what I have to say, for the lack of posts recently. Events and changes in my life have meant that I've had absolutely no time for the blog at all in the past couple of months or so. I've been meaning and desperately trying to rectify that for a long time, but alas, time management has not been on my side.

But never fear! I'm about to begin operating under the premise that I can update the site as much as I possibly can. Mostly it'll be for my own amusement, as it always has been. I initially only set this site up because I adore music and writing about it, and as a platform for myself for any (at the time) prominent future plans. The fact that people actually read this thing (or did it read) was flattering, somewhat shocking and a bit of an added bonus. That's not to say I don't want to cater to anyone who reads what I write; I'm immensely pleased that anybody reads it at all. But at its central form, this is quite a narcissistic exercise.

I've devised numerous upcoming things for the site, which includes long overdue album reviews from various artists, and now the inclusion of a spontaneous genre- orientated mix series via spotify, analyses of new tracks and the new inclusion of any new films I see or gigs I go and watch. I may extend the expanding literal sphere to include novels as well, although they won't necessarily be new.

Here's a program for what I've got planned for the next couple of weeks or so:

I hope to stick to this schedule as rigidly as possible, but there's no telling what mishaps may get in the way. I promise that the site's program will extend beyond this too, I just don't want to plan in so much detail that far ahead. It's a "we'll cross that bridge when we come to it" situation. Which is either a good thing or a bad thing, depending on your opinion. You're not wrong... An opinion is never wrong.

Anyway folks, that's all from me on this transmission. Is there anybody out there? If you're still reading and interested, thanks and praise. If not, that's fine too. It means I won't feel like too much of a disappointing wally if much of what I've got planned for the future never happens.