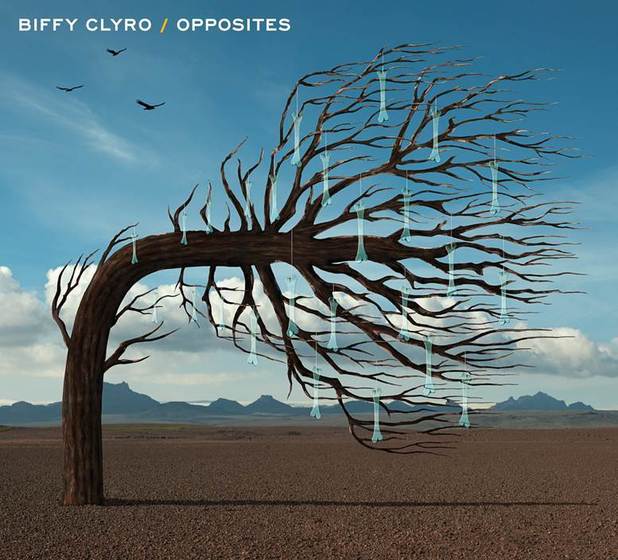 The best bands are those which manage to evolve and advance sonically from album to album whilst still maintaining at least a handful of the charms that made people like them in the first place. Now on their 6th album, Kilmarnock- borne trio Biffy Clyro, whilst pursuing a trajectory that delves further and further into the kind of sound that could potentially sell thousands of seats at Wembley, have held on to the angular, tricksy and sometimes unfathomably brilliant musicianship that dominated their first three records.

That early heritage does make an appearance on "Opposites", but it to be too much of a prevalent part would perhaps defeat the point of the album, not to metion take away much of it's monolithic, soaring and life affirming charm. Every pour of "Opposites" is grandiose, a seeringly loud, clear cut and well produced beast which boasts the band at arguably the most epic and wholesome that they've ever been. Whether joyous or deeply moving (and it has both spectrums of the emotional sphere in abundance) "Opposites" is a complete head rush.

Opener "Different People" is perhaps one of the most assuredly emotionally evocative things they've ever done. Frontman Simon Neil brings in an ecstatically bright and complex guitar line after the song's ethereal build up and is joined by an urgent, pummeling pattern and forms an alost tear- jerkingly beautiful chord progression in the chorus. "Sounds Like Balloons" is everything Biffy have ever tried to do achieved exquisitely, from the blindingly mathy riff in the verse and the fist pumping enormity of the chorus. The wall of thick Mogwai- esque tremolo picking at the end of "A Girl and His Cat" is genuinely moving, whilst the title track sees the first incorporation of heartstring- tugging, swelling synth orchestrations, tied with the heart breaking premise of "Baby I'm leaving here/ You need to be with somebody else."

This is also arguably the album upon which Biffy have branched out the most in terms of musical experimentation. The mostly synth lead "The Fog" then builds up into a bombastic climax of crushing guitar chords and an indiscernable racket of electronic fuzz. There's a harmonious choir of bagpipes on "Stingin' Belle", whilst "Spanish Radio" sees a mariachi band jive plesantly over rolling, tricksy rhythms and  increasingly hefty instrumentation. "Skylight" has incredibly deep, echoing atmospherics that breaks out into a twinkling electro ballad that brings to mind Muse's cosmic dubstep fancy.

As a double disc record, "Opposites" is an ambitious manouvre that only really could have been withstandeable if there was enough variety for it not to fall into the Foo Fighters trap of exercising the "too much of a good thing" notion. In those terms, the amount of experimentation on here only confirms that "Opposites" is the absolute pinnacle of Biffy Clyro finding their niche and writing some of the most anthemic, moving and epic songs to their name. The sense of unity obviously prevelant in the band is what shines through most here- "Opposites" sees them at their most together, andin being so, this is an album that will unite thousands in hope and fist pumping alike.

For fans of: Foo Fighters, Muse